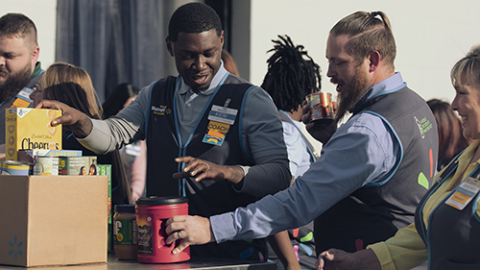 Walmart and Sam’s Club have been donating food to local Feeding America member food banks since 2006. In April, the retailers marked a major milestone, as they hit 7 billion lbs. of food donated.

Walmart and Sam's Club thanked their associates, who started this program and  who "continue to make it work every day so we can give back in each of our communities across the country."

The retailers noted that 7 billion lbs. of food equates to more than 5 billion meals. With the population of the U.S. at over 331 million people, that means they donated enough food for every person in America to eat three meals a day for five days.

In addition to food donations and strengthening the charitable meal system, Walmart and Sam’s Club said that they also offer access to low-cost, nutritious food at their stores and online pickup and delivery. "Through philanthropy, we support organizations developing innovative approaches to food access and increasing people’s confidence in eating healthier meals," they said.

The companies also have launched the Fight Hunger. Spark Change. campaign, to involve others in their fight against food insecurity. Now in its ninth year, the campaign provides meals and also raises awareness in communities that simple actions can make big differences for people who don’t know where their next meal may come from.

"Together with the help of our associates, customers, members and suppliers, we have secured over 1.5 billion meals for people in need through Fight Hunger. Spark Change. These meals are in addition to Walmart and Sam’s Club's food donation program, which distributes fresh produce, dairy and meat along with other food items every week to the Feeding America network of 200 member food banks across the country," the retailers said.

Feeding America CEO Claire Babineaux-Fontenot recently visited Northwest Arkansas and spoke with the local National Public Radio station, KUAF, about what remains in the fight against food insecurity, and how the pandemic impacted it.

“To give you a sense of scale, in one year during the pandemic, about 60 million people turned to the charitable food system for help. And our network provided 6.6 billion meals,” Babineaux-Fontenot said. “With that understood, it gives you context to the extraordinary partnership that we have with Walmart and Sam’s Club — the largest donor of food in our whole network.”

Despite the effort from Feeding America, and the generosity of people across the country, one in eight people in America continue to face food insecurity. Babineaux-Fontenot said it’s not an issue of availability of food, but rather one of awareness.

“There’s some math that should work in our favor. At least 66 billion pounds of perfectly edible food goes to landfills every year — that’s not counting household waste. What if, instead of going to landfills, it went to fill bellies,” Babineaux-Fontenot said. “Our issue in the country – it’s not that we don’t have enough food to feed our people – we do. There needs to be some matching, some intentionality around it. I’m confident that because people have a much better awareness of this challenge, that we’re going to take this challenge on [of ending hunger in America].”