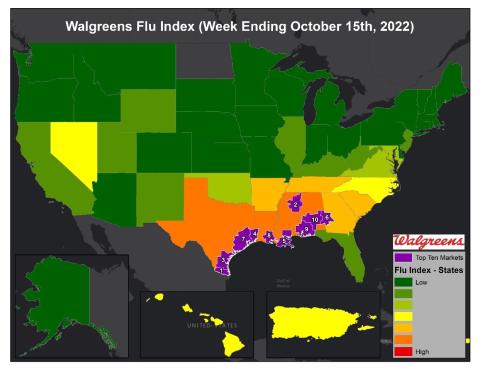 Walgreens' 2022-2023 Walgreens Flu Index shows that to date overall flu activity is more than 10 times higher nationwide when compared to the 2021-2022 flu season and has more than doubled over the past two weeks.

Returning for its ninth season, the index is designed to help communities track flu activity in their area and serve as a reminder to consumers to get an annual shot.

“As we head into the fall and winter seasons, our data show significantly higher flu activity early this year when compared to other flu seasons and it’s increasing across the United States, especially in southern cities,” said Anita Patel, vice president, pharmacy services development, Walgreens. “As we return to pre-pandemic activities and spend more time indoors without a mask or social distancing, we are more vulnerable to respiratory infections.”

During the week of Oct. 10, flu activity was the highest in Louisiana, Texas and Mississippi, the retailer said. Several major cities, including New Orleans, Houston and Mobile, Ala. were designated the top 10 areas with the most widespread flu activity so far this flu season.

The retailer said that based on a national survey, many consumers are either unsure or do not plan to get vaccinated against flu during this flu season. “With rising rates of flu, COVID-19 older and new variants in circulation and other respiratory illnesses, hospitalizations are expected to rise and could result in a strain on the healthcare system,” Walgreens said.

To prevent flu and its potentially serious complications, the Centers for Disease Control and Prevention (CDC) recommends everyone six months and older should get a flu vaccine by the end of October and before flu begins spreading during the holidays. If individuals are unable to get vaccinated until later, the CDC recommends still getting the flu shot because flu activity most commonly peaks in February and can continue through May.

[Read more: Kroger urges customers to get flu shot by end of October]