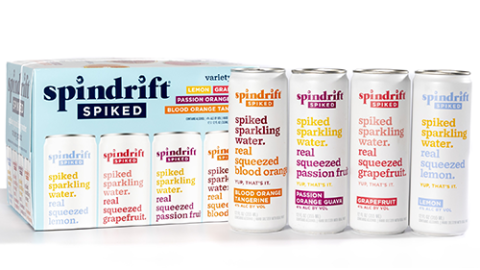 After expanding beyond the flavored sparkling water category in 2021 with a hard seltzer line, Spindrift is taking things to the next level with four new product launches.

“We’re so excited to add four new Spiked flavors to our lineup. Since launching Spiked last year, our community has asked us to spike lemon and grapefruit — and blood orange tangerine has already become a fast favorite on the sparkling side. But I’m most excited to share our first Spiked-only flavor — passion orange guava — it’s a flavor we’ve never done but one we’ve wanted to make for years. The complexity that comes from these tropical fruits with a hint of orange makes it the showstopper of our new variety pack,” said founder and CEO Bill Creelman. “After the overwhelmingly positive response Spiked received last year, we are celebrating our long-time fans by giving the Drifter community a reason to go out and try Spiked, an unbelievable flavor they’ve never had before.”

Available in a variety pack dubbed the Paradise Pack, which was inspired by the passion orange guava flavor, Spindrift Spiked contains 82 to 95 calories per serving and a 4% ABV per 12-oz. can, the Newton, Mass.-based company said.

“We’re following a playbook we know well, 10 years ago. When we started making sparkling water, there were hundreds of options, but all the products were clear liquids with “natural flavors” and no real ingredients — which, in turn, led to very few real, taste-forward options for consumers. With hard seltzer, we saw the very same thing. Hundreds of products in the category, but none with real, recognizable ingredients,” Creelman said.

An additional six states will be added later this year, the brand said.

“To us, nothing tastes better than real fruit, so we saw an opportunity to bring our tried-and-true sparkling recipes to the alcohol category. It’s a crowded space but we’ve seen success introducing a real and delicious product to a sea of sameness,” Creelman said. “The initial launch had a remarkable response and we’re eager to introduce additional states this year. Availability coupled with incredible new flavors will help us make a splash in the dynamic world of hard seltzer.”