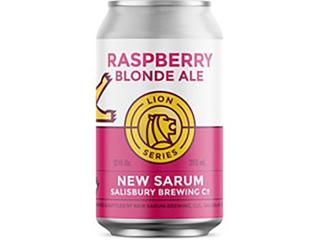 Food Lion has partnered with a local craft brewery to offer a limited-release beer across 67 stores in North Carolina.

The New Sarum Raspberry Blonde Ale, available while supplies last, is handcrafted by New Sarum Brewing in Food Lion's hometown of Salisbury. The specially designed Lion Series logo on the cans is a nod to Food Lion.

"Our partnership with New Sarum is a terrific opportunity to enhance our offerings with a local supplier while at the same time going after a key growth category for Food Lion, which is craft beer," said Adrian Baker, vice president of Category Management – Center Store. "New Sarum, as well as multiple other departments and functions throughout Food Lion, have all contributed to making this program a great success. Our hopes are the New Sarum Raspberry Blonde is the first item in a series of limited release batches that we'll bring to our Food Lion customers."