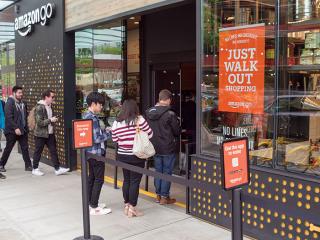 E-commerce giant Amazon has opened just a handful of locations of its small-format retail stores, called Amazon Go, but they are capturing a lot of headlines.

The “just walk out” technology relies on a high-tech network of cameras and shelf sensors that allow customers to fill their shopping bags and leave the store without scanning a thing or going through a checkout of any kind. Instead, shoppers scan the Amazon Go app to enter the store, and they are automatically charged for any items they select when they leave the store.

Stewart Samuel, program director at IGD Services Canada, said he’s been impressed with the Amazon Go experience, and noted that the sensor technology has worked every time he’s visited the store. “From downloading the app to shopping in store, Amazon has put the customer experience at the heart of this development,” he said.

Although the debut of the Amazon Go technology was delayed for several months, while the company worked out the bugs in the technology, Samuel said the company has since quickly accelerated its deployment to five Amazon Go locations. “I would expect this technology to be rolled out to more stores in new U.S. and international cities over the next few years,” he said, noting that some European operators are testing similar solutions, including Sainsbury’s in the U.K. and Albert Heijn in the Netherlands. He also said that shopper receptiveness will play a key role as retailers weigh the costs of such solutions.

William Hogben, CEO of mobile checkout solution provider FutureProof Retail, predicted that vision-based systems like the one at Amazon Go represent the direction that smart checkout tech will eventually pursue. “The long-term future is going to be vision-based systems like Amazon Go, because the algorithms are open source — anybody can do it, and it just gets better and better as the computing power grows,” he said.

Hogben said that vision-based systems still are very early in the development stages, and that Amazon Go operates with a very limited product selection, which makes the system more feasible. The stores, though function more as a proof of concept than a replicable model.

“They actually have more staff than a regular store, and that’s very expensive hardware in the ceiling,” Hogben said,
Raymond Pucci, director of merchant services at Mercator Advisory Group, agreed, that cashier-less technology like the system at Amazon Go is not for all retailers. “I think it requires a lot of investment, and it probably requires a lot of technical support, as well,” he said. “It’s not for smaller-sized companies.”
Advertisement
Advertisement
Advertisement