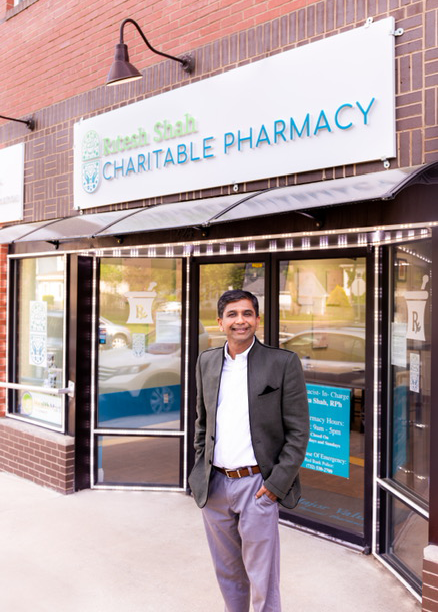 After traveling to India in October to see his sister, who passed away before his arrival, Ritesh Shah wanted to do something meaningful when he returned to New Jersey.

Shah painted the building in his sister’s favorite color, green, as a way of honoring her and as a symbol of the peaceful feeling he gets from providing medications at no cost to uninsured and underinsured patients in his community.

[Read More: Food and pharmacy in one: What is the state of the supermarket pharmacy business?]

“Our patients go to free, charitable clinics because they don’t have much money,” said Shah, who serves as founder and chairman. “In New Jersey, out of about 800,000 people who live under the poverty guidelines, 10% have their prescription needs unmet. Their prescription never reaches the drug store, which is very sad. I told my wife, ‘if we can catch up on only 2% of the people, not only would my sister be happy, but also the Monmouth County community, which has given me so much.’ We are doing this for the people who unfortunately don’t have anything.”

Beyond creating a formulary of 180 medications, most of which are generics for diabetes, heart disease, mental health and nutrition, Shah is taking steps to educate the members of his community.

“Education is huge. We believe we need to educate before we medicate,” Shah said. “We have a TV presentation on diabetes and heart conditions, in English and Spanish. We also have a translator. We have a large Latino and Hispanic population in our neighborhood. They are hard working and can’t afford to buy insurance, and many of them are diabetics. Through Eli Lilly’s Dispensary of Hope program, we have received eight types of insulin at no cost, so our patients get insulin at no cost.”

Shah is no stranger to operating a business. He owns five pharmacies and serves as the CEO of Legacy Pharmacy Group, which is a group purchasing organization, or GPO, for which McKesson and Cardinal are suppliers. In addition, he has been a preceptor for the last 15 years at Rutgers Pharmacy School, where he helps to bestow scholarships to pharmacy students.

Despite his experience and expertise, Shah called on more experienced operators of charitable nonprofit pharmacies for advice, including Chris Toni and Donny John at Nova Scripts Central. He also has a partnership with Jon Bon Jovi’s Parker Family Health Center, as well as Baptist Church and Lunch Break, which provides food and shelter to people in need. “Those are the people who come to our store. We also reached out to a couple of good friends and I told them: ‘I have a dream to do this.’ They said: ‘This is amazing.’ I also reached out to the New Jersey Board of Pharmacy and they loved the idea,” Shah said.

Those who find out about Shah’s work have honored him, including the New Jersey Pharmacists Association, which gave him a Pharmacist of the Year award for his philanthropic work.

Local media also has taken notice, arriving at his pharmacy to interview him after he helped save a female patient’s life by giving her salt tablets prior to calling an ambulance to take her to the hospital, where she survived a pulmonary embolism.

Perhaps the greatest bit of gratitude Shah has is for his wife Asha, also a pharmacist, who joined him in his mission to open a nonprofit pharmacy.

“We’ve been doing this for the last 25 years,” Shah said. “I told her: ‘It’s time to give back.’ Hopefully, we can create a healthier community and address healthcare inequities that I see every day by providing this care. My sister’s death shook me up, and I told my wife: ‘We should have medication access and immunizations for people who are underserved and underinsured. And this is how I want to contribute so my sister can smile down upon us from heaven.’ My wife said: ‘After 25 years of marriage, I will be nice to you again.’ She put on her white coat and is now a trustee and the pharmacist in charge, and serves without any compensation.”

Lastly, it’s apparent that Shah also is very proud of his son who attends George Washington University as a third year medical student, and who will become an MD in 2024. His daughter is a pre-law student at Villanova.

Shah said believes he set a precedent for his children, and he hopes to do the same for pharmacists with this advice: “You can elevate your profession by giving back this way. We took an oath to serve. I think this is a meaningful way we can give back.”