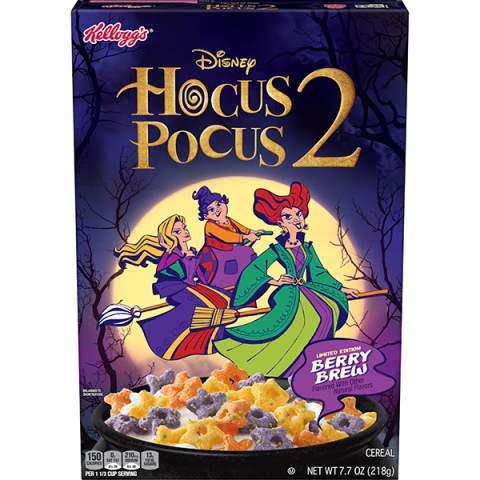 The release of Disney’s “Hocus Pocus 2” is still a month away, but Kellogg’s is getting into the witchy spirit.

Recently, the brand announced the release of its Kellogg’s Disney Hocus Pocus 2 cereal, which will give fans of the film a chance to celebrate the Sanderson Sisters at breakfast.

Featuring a blend of berry brew flavors, the cereal has purple, orange and yellow star-shaped pieces that are topped with purple flecks reminiscent of the Sanderson Sisters’ robes.

“Disney’s Hocus Pocus has been a part of family Halloween traditions for years,” said Sadie Garcia, director of brand marketing at Kellogg All Family Cereal. “Now, with Kellogg’s Disney Hocus Pocus 2 cereal, families can celebrate spooky season alongside the Sanderson Sisters as they return on Disney+ this fall.”