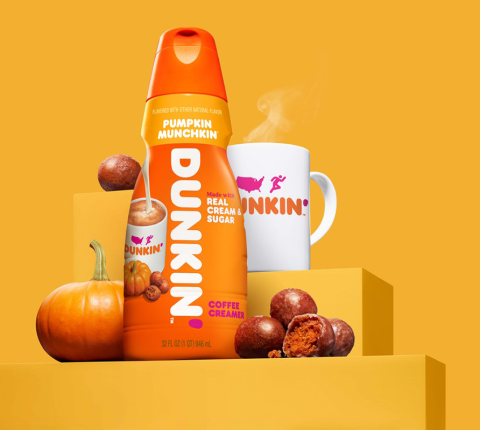 The flavors of a popular, seasonal munchkin from Dunkin’ are taking on a beverage format.

“People who run on Dunkin’ want the option to do so at any time. With the rise in popularity of at-home coffee creations, we’re excited to give Dunkin’ fans the opportunity to create their own pumpkin-forward coffee beverages in their own homes,” said Kallie Goodwin, vice president of traditional creamers for Danone. “This limited-edition creamer transforms Dunkin’s beloved seasonal bakery item into a coffee creamer packed with flavor that consumers will love to enjoy at home. It’s reminiscent of the cozy fall season and we’re excited to bring a Dunkin’ flavor inspired by a huge fan-favorite to fridges nationwide.”

It has a pumpkin-forward flavor and hints of sweet donut glaze and natural spices, the company said.

“Dunkin’ always has an extensive menu featuring pumpkin flavored treats, and this season, people who run on Dunkin’ now have a chance to bring the taste of fall into their kitchens with the arrival of the Dunkin’ Pumpkin Munchkin Creamer,” said Brian Gilbert, vice president of retail business development for Dunkin’. “With the debut of this new creamer, we’re giving fall fanatics the taste of coffee and donuts at once with a delicious pumpkin-forward coffee creamer inspired by Dunkin’ Pumpkin Munchkins Donut Hole Treats.”

Available for a limited time, Dunkin’s Pumpkin Munchkin Creamer comes in a 32-oz. size that retails for $3.99 at major retailers nationwide.

Inside Retail: State of the Industry Quarterly Report: A Deep Dive Into the Stories That Shaped Q4 2022

Q4 often shakes up the retail industry across sectors as consumers enter the period of holiday spending and gift purchasing. But, beyond the traditional holiday shopping season, what trends and news shaped the industry this past quarter?