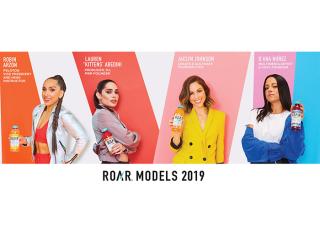 Roar Organic is putting a new spin on its digital campaign by celebrating innovative females.

The brand, known for its electrolyte infusion that contains antioxidants and B-vitamins, announced that it is putting a new spin on the traditional role model with the Roar Models campaign.

“In creating Roar, we wanted to provide a beverage that fuels the millennial hustler in all aspects of their routine so they can stay hungry, not thirsty,” Eric Berniker, CMO at Roar Organic said. “Roar features the perfect combination of ingredients for success — electrolytes for faster hydration, antioxidants to protect against free radicals and B vitamins to help you get up and go. These role models come from diverse backgrounds and a variety of industries, but all share the common goal of inspiring females to find their 'Roar.' As our four partners live and breathe our brand ethos, it was only natural that they become our Roar Models for this campaign.”

Aimed at celebrating innovative females who have harnessed their influence to make moves and be heard, the campaign features four women who are paving new paths for themselves and others across several industries.

“I think now more than ever we need real role models [who] not only showcase success and positivity, but also showcase the behind the scenes in an insta-perfect world,” Johnson said. “The Roar Model campaign perfectly encapsulates what being a modern confident woman is, flaws and all. Because for so long, women were pitted against one another, it's time to change the narrative. We are stronger together, and when women support or help other women, magic can happen.”

As part of the campaign, Roar will share insights, tips, hacks and personal journeys of each featured woman from August through November across its Instagram, IGTC and YouTube channels.

“We need to level out the playing field with more talent, more compassion, more diversity and more understanding that a woman's hustle is just as unmatched. Being a Roar Model represents hustle and creativity, while showing off our unique and unapologetic individualities,” Nuñez said. “This generation is writing a narrative that's never been written before, and with that comes a lot of obstacles, lack of resources to help navigate our way through a self-made generation. It's important to use our voices to help continue writing that narrative and shaping the future for those that follow right after us.”

In addition, the brand will host a contest that encourages consumers to share how they are looking to make moves and be heard in their communities. Four winners will be rewarded with money to put toward their business and a trip to New York City to attend the Roar Models Conference in November.

“We're always working towards equality and in a world where many women don't see someone they can identify within the positions they aspire to be in; there's less confidence in taking risks and chasing dreams,” Lauren 'Kittens' Abedini said. “The more we shed light on women doing cool powerful things, like the Roar Model campaign, the more chances we have to inspire others. I'm excited to be part of a project that's meant to empower and uplift women's voices.”