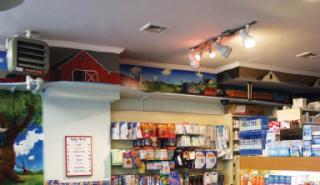 NEW YORK — One of the first lessons in life that children learn is that getting sick isn’t fun, and going to the pharmacy isn’t too exciting either. In 2004, pharmacist Charles Tabouchirani decided to change that by opening Cherry’s Pharmacy, a store that specializes in dealing with children.

The store is small — 550 sq. ft. — but a bright mural, a collection of toys and an electric model train that travels in a loop along the wall make an inviting waiting room for Cherry’s core customers. The staff includes two pharmacists, two technicians, two cashiers and three messengers that allow Cherry’s to deliver medicines throughout Manhattan.

But there’s more to it than amusements: The store does nonsterile compounding — particularly for children with gastroesophageal reflux disease but also for organ transplants, some cancers and cardiac disorders — and it works with Memorial Sloan-Kettering Cancer Center. Additionally, it specializes in pet medications. “Independent pharmacy could be very rewarding if one tries to get out of the box and find a niche,” Tabouchirani told Drug Store News.