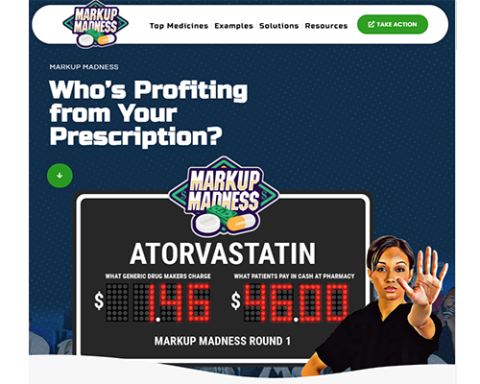 The price of a dose of amlodipine is 36 cents when it’s sold by a generic drug manufacturer to the middlemen, but by the time it reaches a patient at the pharmacy counter, the cash price is $19.00 — a markup of 5,277%.

Focusing on the markup of medications is the contention and driver of The Association for Accessible Medicines’ new campaign, dubbed “Markup Madness.”

The campaign highlights the role that “the big men in the middle play in running up the score on patients (and not just during March, either),” the organization said in a statement.

As part of this campaign, AAM is urging each individual to check the score online for examples of egregious markups, resources to understand the problem and solutions that will level the playing field.

While cash isn’t necessarily the norm when paying for a prescription, the examples on “Markup Madness” are provided to start a long overdue conversation about some of the factors that contribute to high drug prices in America, the organization said.

In addition, AAM CEO Dan Leonard pointed out that generic drug manufacturers provide unprecedented value to patients and the healthcare system as a whole.

“But that industry and the value that it provides is threatened by markets that are hopelessly distorted by outdated policy, anticompetitive tactics and markups from middlemen that would not exist in a functional market,” Leonard said. “Competition from generic and biosimilar medicines is the only proven means of reducing drug prices, but real reforms are necessary to protect the value that already exists today and to ensure that safe, affordable and effective versions are available to patients for years to come.”