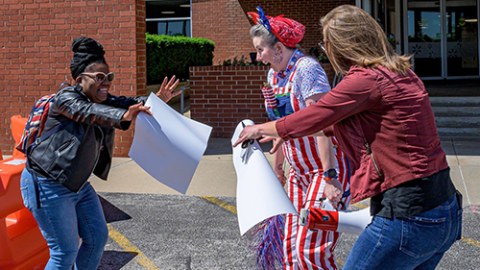 Walmart has made its selections for the ninth annual Open Call event. With nearly 1,200 small and mid-sized business owners receiving official invitations, this year’s registrants mark the largest group ever selected to participate in the two-day event. Finalists represent all 50 states, including the District of Columbia, with nearly 60% of them self-identifying as a diverse-owned business.

The business owners have the option of pitching their shelf-ready products directly to Walmart and/or Sam’s Club merchants either virtually or in person on the second day of Open Call. Each supplier will be afforded a 30-minute one-on-one pitch meeting for a chance to secure deals, ranging from supplying products to a few local stores to supplying products to hundreds of Walmart and Sam’s Club locations, as well as Walmart.com and Walmart Marketplace. Open Call is set for June 28 and 29.

This year, Walmart notified some lucky entrepreneurs of their selection in unconventional and innovative ways. Some unsuspecting finalists were invited to join a Zoom meeting with Walmart representatives to receive updates regarding the Open Call application process. During the meeting, these business owners received confirmation of their spot at this year’s event and also were congratulated on video by celebrity pop artist Kevin Jonas of the Jonas Brothers. The trio launched its line of premium popcorn, Rob’s Backstage Popcorn, exclusively at Walmart earlier this year. In addition to the celebrity surprise, two business owners were notified that they would be advancing to Open Call via drone delivery.

“The entrepreneurial spirit is contagious, and that energy is a big part of what makes Open Call so much fun,” said Scott Gutche, senior director of U.S. manufacturing. “Being able to surprise some of the business owners who’ll be taking part is the perfect way to kick off this year’s celebration of the American Dream.”

Open Call is Walmart’s largest sourcing event that supports Walmart’s 10-year commitment to American jobs by investing $350 billion in products that are made, grown or assembled in the United States. For the first time in Open Call history, Walmart extended an early access period for Marketplace sellers to submit their applications. More than 4,500 entrepreneurs applied and over 13,000 products were registered.

In addition to one-on-one pitch meetings with Walmart and Sam’s Club merchants, participants will have an opportunity to hear directly from Walmart executives and merchants on day one of the two-day event. Smaller breakout sessions will be available throughout the day where suppliers can learn more about valuable topics and resources available to them.