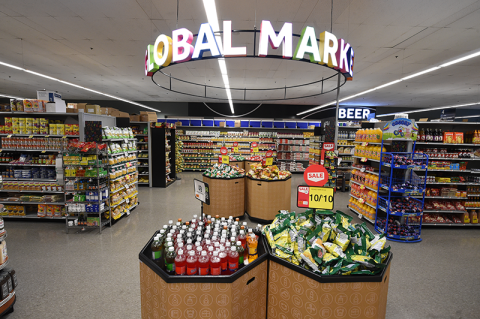 Stop & Shop is poised to improve the shopping experience for local customers.

The retailer is making a $140 million capital investment in its New York City stores, with a focus on adding thousands of new items from around the globe to ensure the assortment at each store reflects the diversity of the neighborhood it serves.

Store remodels will deliver a fresh new look and feel for customers and will also showcase value with deal bins and the addition of the Flashfood program, which offers fresh foods at up to 50% off. Stop & Shop’s Bay Plaza store in the Bronx, the first to be remodeled, celebrated its grand reopening with a ribbon cutting on June 10, with additional store upgrades across the boroughs taking place over the next two years. In addition to the investment in its stores, Stop & Shop has committed $1 million to fight food insecurity across New York City this year through several local initiatives and community partnerships.

Stop & Shop began operating in New York City more than two decades ago and currently operates 25 stores in the Bronx, Brooklyn, Queens and Staten Island. It also offers home delivery in all five boroughs and employs more than 3,300 associates in the city.

“We’re proud to make such a significant investment in New York City, and we’re excited to show customers that we can be the one-stop shop for everything they need, and that we’re delivering great value, particularly in this current economic environment,” Gordon Reid, president of Stop & Shop, said. “We’re also committed to fighting hunger in the boroughs and as part of our $1 million commitment, we’re investing nearly half a million in the city’s public schools and colleges to ensure local students have consistent access to healthy food so they can succeed in the classroom and beyond.”

At the center of Stop & Shop’s enhancements to its New York City stores is a significantly expanded assortment with thousands of new items across the store to better meet the needs of the diverse neighbors it serves. Stop & Shop’s Bay Plaza store in the Bronx, for example, will feature a new Global Market with authentic products from 14 different regions tailored to its neighbors and for those looking for unique products for globally inspired cooking. The Global Market will include a wide array of West Indian and Caribbean products, including items specific to Puerto Rico, the Dominican Republic and Jamaica, plus halal meat, dairy and grocery items.

Stop & Shop’s New York City stores also will have a renewed focus on value, offering more sale bins and special values on relevant products highlighted in a New York City-specific weekly circular ad. Stop & Shop also is the first retailer in New York City’s five boroughs to offer Flashfood, which gives customers access to fresh produce, meat, dairy, bakery and other items nearing their best-by date at discounts of up to 50% off. The retailer’s mobile app not only helps regular shoppers save over $500 a year on their grocery bills, but it also furthers Stop & Shop’s commitment to reduce food waste by 50% by 2030. Flashfood launched at the Bay Plaza store on June 10 and will expand to other New York stores later this year.

Stop & Shop also is making a significant investment in the community outside of its stores with a $1 million pledge in 2022 to fight food insecurity across the boroughs. A decades-long partner with Food Bank for New York City, Stop & Shop will once again be sponsoring the food bank’s Mobile Pantry — an eight-week-long distribution of fresh produce and pantry staples — that kicks off in Ozone Park, Queens, on June 24.

Stop & Shop also is launching a new food security initiative in partnership with Montefiore Hospital & Quincy Asian Resources that is set to begin at P.S. 199X in South Bronx, and is significantly expanding the Stop & Shop School Food Pantry Program in the boroughs. The program was established to help limit barriers impacting students’ ability to succeed in the classroom by making sure that they have consistent access to food. By year-end, Stop & Shop will support more than 30 in-school pantries across New York City.