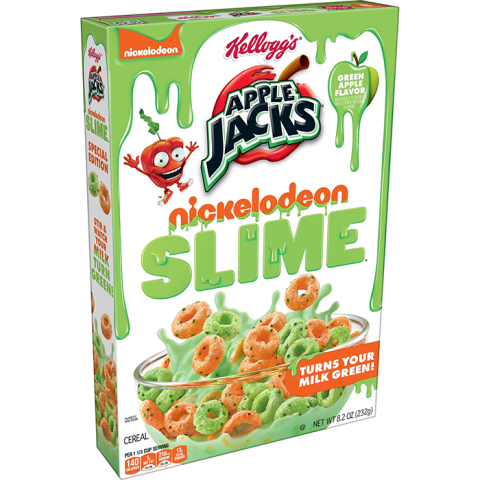 Breakfast is getting a ’90s makeover with a brand-new collaboration from Kellogg’s.

The Battle Creek, Mich.-based company is adding a dash of Nickelodeon’s infamous green slime to its Apple Jacks cereal.

“Kids and adults alike will recognize the fun and spontaneity of Nickelodeon Slime from many of their favorite Nick shows,” said Priya Mukhedkar, senior vice president of toys and packaged goods at Paramount Consumer Products. “We are excited to bring our iconic green slime to fans in a whole new way with Kellogg’s Apple Jacks Slime.”

Kellogg’s Apple Jacks Slime cereal features sweetened, toasted orange and green loops with notes of green apple flavor. Once the milk is added to the cereal, it turns a vibrant shade of green.

“Both known for our bright orange and green colors, Kellogg’s Apple Jacks and Nickelodeon Slime are a perfect pairing,” said Sadie Garcia, director of brand marketing at Kellogg All Family Cereal. “Now families can discover all the fun of slime at the breakfast table with a delicious new cereal that changes the color of the milk while you eat.”

Consumers can find Kellogg’s Apple Jacks Slime cereal at retailers nationwide for a limited time throughout July at the suggested retail price of $4.49 per 8.2-oz. box.