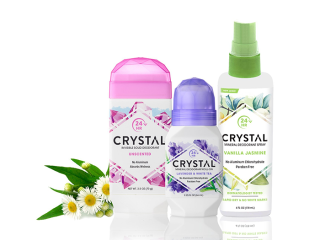 Mineral salt deodorant maker Crystal recently completed an extensive re-packaging and branding program. This initiative, which Louisville, Colo.-based company said was undertaken as a means to broaden awareness and appeal among new and longtime consumers has been recognized with a Graphic Design United States Award.

The company partnered with New York City-based agency the Goldstein Group to carry out its new packaging and branding. Research conducted by the teams revealed that though consumers remain loyal to the products they know and love, they also would welcome line extensions.

“We saw an opportunity to better communicate with this audience,” Ramona Roof, VP of marketing at French Transit, Crystal’s parent company, said. “So, we decided to reimagine our presence on shelf with new, trademarked packaging that is identifiable with our brand, and to establish a voice that speaks clearly to consumers.”

The brand’s new look reflects its heritage of creating mineral salt deodorants and the trademarked dome-shaped caps and bottles not only mimic naturally-occurring minerals and crystals but also reinforce the brand name, the company said.